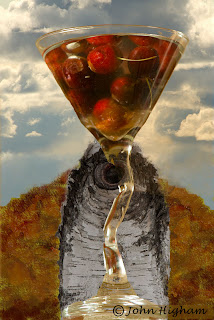 Reverend Stonehenge Stumps waited until Peter Stumps reached the age of sixteen before introducing him to the Mysteries of Isabella and the secrets of lonely, northern highway through muskeg, beaver, heavy stands of spruce, fir, pine and birch, moose and bear country.
Isabella Stumps was born in the seventeenth century from a drop of Oogah and a drip of Oorsis combined on a pink granite slab, crossed with black rippling veins of lava and quartz and decorated with green coin lichen rings.
Oogah and Oorsis said: "You are the beginning of a long and pointless lineage of those who go out and preach mythology to render the unfamiliar less familiar, to make the unknown less threatening, to reduce fear of death through promises of the afterlife on Planet Blop. You are among those preachers who try to pluck thorns from roses, who ooze words of honey mixed with bitter juice at the bottom of a glass of cherries, who flatter to increase self-esteem and provide suggestions to prolong adolescent immaturity, who encourage stupor, distraction and mindless entertainment, background music, palm pilots, digital organizers, cell phones, various game gadgets and mobile devices."
Through attaining successful standardization on earth, by simplifying one's life into a set of behaviors and using carefully engineered forms and declarations streamlined for efficient data entry, one's progress could be measured and evaluated.
Peter and his father Rev. Stonehenge Stumps drove to the house of Grandmother Aida Stumps, a two-story wooden box of a house at the end of a rut road among a stand of birch, pine and spruce overlooking a small lake, which served as a sewage reservoir and source of drinking water. Grandmother appeared like an apparition on the other side of the screen door, after Stonehenge parked the 67 Chevrolet Biscayne in the meadow. Grandmother Aida's comical, syrupy voice, pleased at the arrival of son and grandson, could be heard.
"Come in, come in. Hi sugar."
She gave Peter some money. The idea was to spend it back in town. There's a hotel on the edge of town where decades ago, loggers would go in to get drunk and robbed of their hard earned pay. That was back in the days when the policy was to not leave one pine standing, for fear a competitor might come in and take it.
Grandmother cried out to her son in loneliness, creating fear of death in him. There's nothing more terrifying than to see one's mother fall apart and start screaming and hysterically sobbing about the pain of existence, the chronic ache in her joints and how things were falling apart, because people had lost their senses and behaved in a degenerate fashion. Nothing was sacred anymore. People turned their backs on God and sold holy books at garage sales or in used bookstores.
It was because of this state of affairs that God decided to give it a break and go on Cosmic Vacation. He sent Oogah and Oorsis to try and find meaning in the aggression, chaos, greed and destruction on earth.
After the first wave of excitement subsided, Stonehenge asked in a timid voice if there was anything he could do to lessen mother's agony. She said, "Yes, make me a glass of warm brandy."
That evening, Stonehenge whispered to me a change in plan. Instead of staying with Aida a week, we would leave early the next morning. That was the last time I saw Grandmother Aida. They found her body frozen one February, on the kitchen floor. She died how she wanted to die, at the age of eighty, alone in her house in the bush.
Posted by Lohbado at 2:05 PM