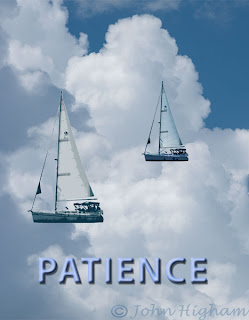 Patience is good for bicycle riders and motorists alike, especially during a heatwave in July. Lohbado rode his bicycle down a freeway service road, full exposure to blast heat of noon sun. Stay focused. Don't run into a pot hole or get caught in a deep rut and fall off the bicycle. Don't ride through red lights. Beware of motorists who cut too close. They have the power to knock down and kill a cyclist. Be patient. Don't lose your cool. Getting too intense only makes confusion worse.   Ride towards cream puff clouds. Soft white shapes cool the mind. Read the pattern of tar lines, bumps and craters in the pavement. Lohbado laughed himself silly at the sheer silliness of his silly thoughts. Imagine a sailboat, floating across the sky.
Posted by Lohbado at 11:37 PM No comments: 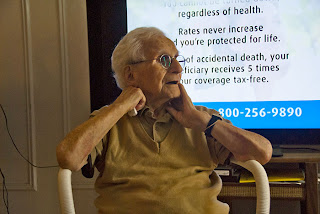 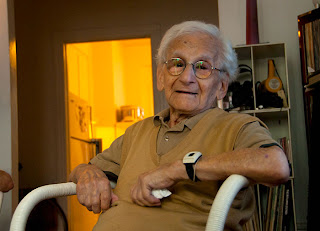 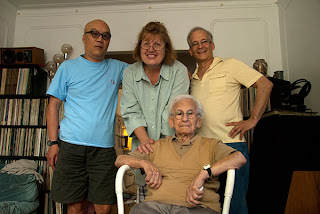 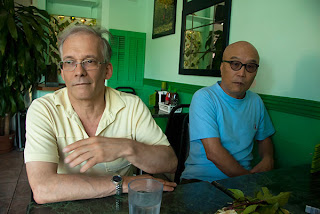 One of the oldest people in Montreal lives within walking distance of where I live. David is now 109 years old. I went over yesterday for a visit and to see old friends.
Posted by Lohbado at 11:48 AM No comments: 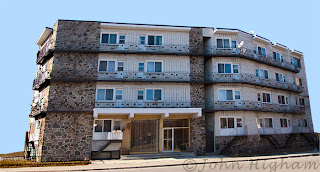 Buildings pop up like monuments right before the very eye of the beholder. Lohbado wandered in a daze down the sidewalk and then looked across the street at a four story building, a solid, plain monument to habitation, a veritable symphony in stone and brick and containing windows. So many human dramas continue to be enacted behind closed doors, in quiet rooms overlooking a noisy street. Whoever can identify the building will receive a one year free membership to Club Morono.
Posted by Lohbado at 11:15 PM No comments: 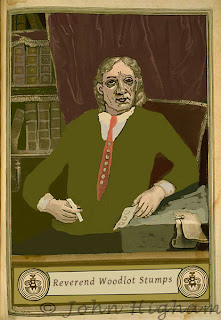 Sometimes identity confusion scrambled Lohbado's brains and he had flashbacks to another era, when he was Peter Stumps, a sexually repressed, spiritual drone, serving in his grandfather Woodlot's church, the Church of the Living Monument. Woodlot made his fortune as a lumber baron, but after a severe bout of alcohol psychosis, had a series of visions that made him sell the business and build a church. That took place back in the 1920ies, in a remote Canadian village on an escarpment overlooking a vast body of water. After the Reverend Woodlot Stumps had a mental breakdown and killed himself, his son, Peter's father, the Reverend Stonehenge Stumps took over. The sect church died a slow, lingering death in the hands of Stonehenge. The sect church existed as an extension of Woodlot's ego. Once Woodlot was gone, the wooden church in the forest was doomed.