Sometimes, when waking up Monday morning to the prospect of another week, it helps to visualize something pleasant. I thought of this landscape, of Prince Edward Island, where one doesn't hear noisy neighbors, or breathe vehicle exhaust. The landscape is not cluttered with signs. In the morning, one could wake up to the beauty of nature. Of course, one could find nature in the city. That requires a bit of creativity. 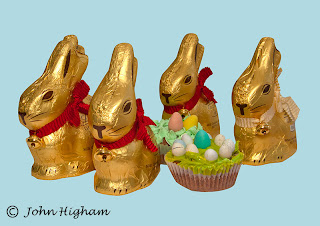 Protection of the Easter Bunny, milk chocolate in gold-colored foil, unwrap the bunny, break off a piece and hold in in the hand. Close the hand over the chocolate and let it melt. Open the hand. Observe the dark-brown, sweet substance in the palm of the hand. Lick it off. Chocolate coats mouth and teeth. Milk bunny softens and collapses in the mouth. 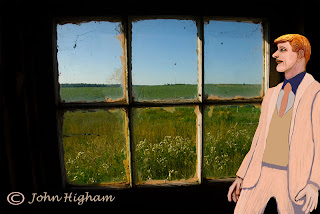 A manikin or dummy having an existentialist or Lohbado moment, bearing the full burden of freedom as he stands in an old barn and gazes out at potato fields stretching to the horizon, notice the contrast of light and dark, to emphasize the tension of inner and outer. Maybe he should move to Prince Edward Island, home of Ann of Green Gables and relax by the ocean. 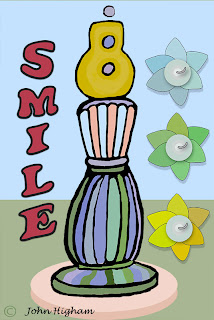 I never gave much thought to smiling, until Thich Nhat Hanh described how one could draw in peaceful vibes and breathe out peace with a smile. It's been years since I read Miracle of Mindfulness, so I forget the details. The general idea is how a smile and awareness of breathing could flip a person into a state of mindfulness and relax body and soul. The other discussion of smiling occurred in 1975, the summer I worked in northern Manitoba on a track repair crew. I took a photo of a Saulteaux man and he didn't smile. He said it's foolish to smile into the camera, but didn't elaborate. The way he said it made the meaning clear. 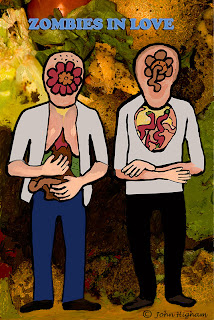 Halloween, time to dig out those zombie pictures. Fruits and vegetables don't last very long. They have to be eaten before they get over-ripe and then begin to rot. I thought about this while lying in bed last night and felt bloated, a sense of putrefaction going on in my belly, not to mention bad breath and a film of sweat.
Read more »
Posted by Lohbado at 10:58 AM No comments: