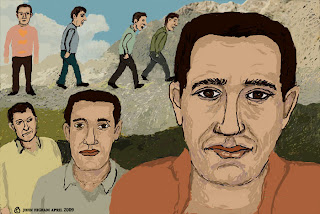 Getting old is like ending up at a garden party on a freshly cut lawn, the smell of damp grass and earth, a few mosquitoes, a little shade and bright light. As the body becomes weak, the mind could be porous, open, more holes in the tissue of lies, after losing illusions and dropping expectation.

Accept and experience the pain, without sinking into dullness. There’s nothing to prove, no prize. You score death.

Graduation ceremony is the funeral. There’s nothing to obtain, nobody to impress. Might as well keep going. Cheer up. Don’t sink into self-pity. Don't be afraid. Deal with whatever is happening. Forget about going somewhere or doing something. There’s no progress. The pilgrim gave up. He went into a hotel, ordered something to drink and talked and listened to whoever was there.

My mind gets working overtime. Find a sheet of paper. Make some pictures. Write a story. Pretend to be a Sasquatch, all hairy, and with giant feet.

Vulture Nest Dweller says death is a scary experience. You thought life was scary; wait until you encounter death.

Ok, maybe this is a fancy way of saying, I got laid off. My contract will end June 30 and then it's unemployment. The worst thing about getting laid off was the bullshit story the organization invented as a reason for termination.
Posted by Lohbado at 5:30 PM No comments: Halleluja, brothers and sisters of the dreaming universe, a long overdue spring break happened for teachers of Nunavik. After reaching burnout, I boarded an Air Inuit Dash 8 for Kuujjuaq and then transfered to a jet plane to Montreal.

On board the plane was party time, people looking forward to unwinding after the stress of work, a breather in the south, visit friends, restaurants, whatever you like. I didn't sleep for the first few days. The change from northern to southern world is a shock to the system. Sometimes I feel like an outsider, watching the world through a window, unable to connect to what's happening.

But there is a way to connect. Go to a crowded cafe; sit there and drink coffee. After a while it starts to soak in, people sitting around talking, reading, laughing, hanging out. Watch people line up along the platform as the subway train pulls up to the metro station. Some cafes no longer torture customers with background music. Natural sound is soothing, the melody of voices, footsteps, doors opening and closing, buzz of coffee machines, cash register. I remember the old days, back in the sixties, when it was normal to be in a public space without the bombardment of background music. Background music forces a person to talk louder. It puts my nerves on edge and nine times out of ten, it's not my taste in music.

Some cafes have four or five TVs featuring sports, weather, news, whatever. I sit back and watch the people, for example, a man in a faded brown leather jacket, cracks in the leather, iguana skin, elephant ass jacket and faded tight jeans, tall leather boots, long white hair, unshaven jaw. Circulation of people, in and out. Grizzled man, maybe forty, with eastern import bride, maybe twenty, pretty face, thin and small. He's happy when she leans over the table and gives him a kiss.

Soccer fans, eyes glued to TVs, glued eyes. Laughter, cheering, shouting, sports chatter, coffee cup commentators, woman laughing at every silly comment from her beau. Pseudo-mystical dread-lock man, channel aggression through eastern guru swami wise man trip. It's all in the hair, bandana, poncho and jeans, in the threads, a cartoon costume. The man ready to speak in a far away deep hollow voice at the Feast of the Last Soccer Game in Social Club. Another man with beard, scruffy silk scarf, offers himself to whoever will listen. I go pee and get dizzy from looking at psychedelic, chemical eyes, like grandmother's eyes in the mirror. The cowboy man looks small from a distance but big up close. He fades into light of the doorway, skeleton shadow, a man risen up like a snake from the dust.
Posted by Lohbado at 1:06 PM No comments: