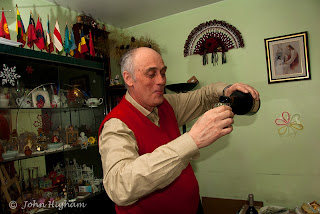 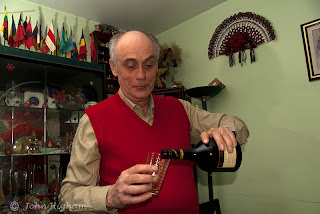 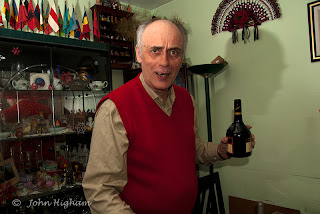 Brother Kenneth has his first drink after lent ritual abstinence. From Ash Wednesday to Easter, no alcohol, until 8 PM, we counted the seconds, bottle of brandy raised and then that first hot flash of hard liquor. It's both practical and religious. It's practical to save money. It costs a lot to drink every day. It's cheaper to drink only during special occasions. It's religious to take spirits into the blood stream and to bathe the brain in distilled liquor. Hallelujah! This is something I can believe.
Posted by Lohbado at 4:11 PM No comments: 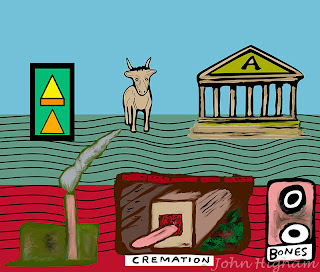 Lohbado wandered down a sidewalk, which sloped downwards, outside the hospital. Years ago, he worked in a hospital. One of his jobs was to burn things from pathology. When the freezer got full, he'd wheel a cart loaded with black plastic bags to the incinerator and burn them. One time he and his buddy Edgar tore open some bags to have a peek at what was inside. They saw livers, brains, a stomach and stuff like that, body parts from autopsies or operations. Edgar opened the metal door. They threw in the garbage bags and pulled a lever.

Everything would turn to ash. Eventually his body would be a corpse. Lohbado wanted to be cremated. Sometimes, as a body burns, it has to be raked with a poker, to make sure all the bones get burned. Little chunks of bones sometimes remained in the ashes. The ashes would be put in metal boxes and then given to someone who knew the deceased. If nobody claimed the ashes, they would be stored for a few years before being buried along with the contents of other unclaimed urns.
Posted by Lohbado at 9:23 PM 1 comment: 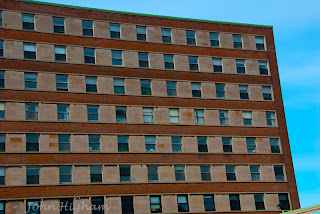 Windows may be enjoyed in 2011 and for the forseeable future in the large Jewish General Hospital complex on Cote des Neiges in Montreal. One of my children was born in that hospital. I often pause, while walking up the hill, to contemplate the windows and to imagine what sort of activity is going on inside. Unlike electronic gadgets and software, the hospital bricks survive decades, without yearly updates. There's no need for plugins or addons. It's refreshing to see something so solid, sitting there on the edge of a hill, a place of birth, death, accident and sickness. I often hear ambulances racing along that street, heartache, sorrow and pain. I hope the patients in there soon recover and have peace of mind.
Posted by Lohbado at 8:32 AM No comments: 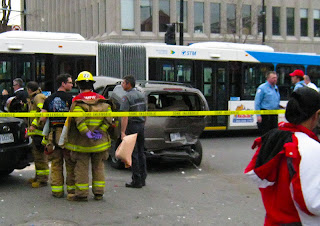 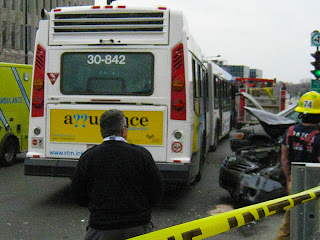 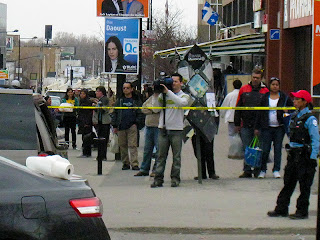 On the way to Plaza Cote des Neiges, I saw an accident, a triple collision, crumpled car and mashed minivan. The transit bus emerged without a scratch. Both car and van plowed into the side of the bus. Those buses are built like tanks. I arrived as the paramedics were putting the victims on stretcher. Fortunately, the injuries didn't appear too serious, at least, not at a glance.

(Actually, I just saw in Journal de Montreal that fortunately, nobody was hurt.)

up against the wall 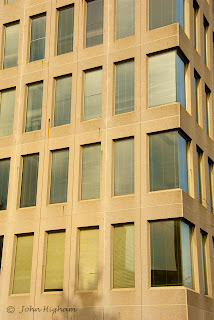 Clothes made a stink about needing to be washed, carrots asked to be cut before boiling, microwave rice and lentils, throw in a little curry, Lohbado was about to sit down and eat when Keith Chambers phoned and demanded to be seen. Lohbado said he could not visit Chambers room, but Keith Chambers could visit Lohbado. (Is there a difference between the man considered as Keith independent of the Chamber, or do the two go together like a pot and its lid under the bed? Such dreamlike considerations, quite typical of the moronic mumbling that goes on at Club Morono, nearly caused his soup to get cold.) Entschlossenheit! 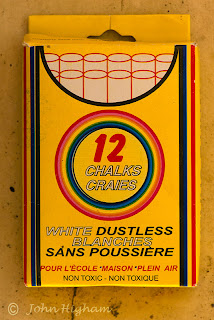 White dustless chalk, sans poussiere, twelve of them, non-toxic, good for school, house or outdoors, if someone gave you a piece of chalk and pointed to a surface, what would you write or draw? The writing is on the wall. What kind of marks do you leave on the sidewalk as you walk down the street from one milieu to another? White as a ghost dustless chalk could be rubbed out with a sleeve, chalkboard brush, rag or even the back of the hand.
Posted by Lohbado at 7:09 AM No comments: