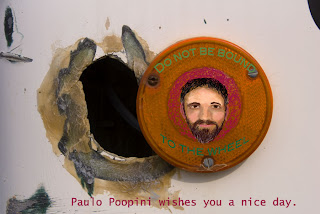 It’s nice to be wished a nice day in the morning, to hear a friendly greeting as you walk into the workplace, a cheerful hello, how are you doing, have a nice day. Right away that tunes me into the cosmic comedy, that we’re really players, pretending to be doing something really important, because we need the money. The almighty dollar, tinkle, tinkle, like pee pee, bestows worth on the sweat and blood of one’s brow, as one struggles to earn a living.

This day will most likely be forgotten. How could one possibly remember every detail of each instant? In fact, each instant could be infinitely divisible, to the point where the instant vanishes as it appears. In other words, each pinprick of an instant is like a hole in the tissue of reality spun on the loom of strong emotions and naïve views. As the tissue of self-deception shreds to pieces under the analytic gaze, unlimited opportunity opens up. Once self-imposed boundaries begin to dissolve, then there’s no reason to hold back. There’s no reason to be miserable or elated. Things are as they are, without limit. The overlay of hope and fear, of like and dislike is irrelevant.

Trying to impose one’s point of view, or to assert ego is about as effective as trying to drive a nail into the sky, or trying to sign your name on water.

Of course, as you might guess from the previous post, my mind is quite obscured and overwhelmed by emotional reactions to the daily grind and conflicts that happen when I bump up against someone who feels that what I’m doing is not quite right. Usually the person’s feeling is based on uptightness and nothing more. If you question the person, he might get angry, or argue in circles, contradict himself, get off topic and then totally deny what he started out saying. Such fruitless discussion leaves a sense of alienation, a bad taste in the mouth. It’s often better to keep quiet and not respond to verbal farts from people who don’t approve of what you’re doing.

For example, art, usually art meets with indifference, or hostility. Fortunately, enough people “get it” and have a good laugh, which is encouraging. Of course, I’d do art even if every man woman and child on the planet thought it was a waste of time. Art needs no justification or explanation. But it certainly awakens strong reactions, sometimes. Some people have ideas about what art should be. They say: John, why can’t you make something nice? Why does your art have to be so weird? Are you deliberately trying to piss people off?

Well, what am I supposed to say? Maybe I’m supposed to reply: oh yes, you’re right. My art is a waste of time. Thank you for letting me know. I will stop doing art right now. Or maybe I’ll do art that is easy to understand and enjoy, art with a simple, pleasing message. I will create images that insult and irritate nobody.
Paulo Poopini would like to take this opportunity to wish you a nice day. Paulo further underlined the urgency of this opportunity by saying: do not be bound by the wheel. I’m not sure what he means, although he did sit down to a plate of mixed vegetables and rice.
Posted by Lohbado at 7:11 PM 1 comment: 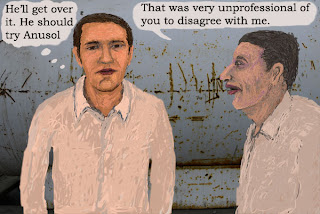 Someone asked, what's anusol? It's a product similar to preparation-h. "Unprofessional" is a buzz word, used a lot these days, to describe someone who disagrees with your personal taste, vanity or views about reality. Workers often use this term of abuse towards those with less power.

The trouble with going to work is that you’re forced to deal with people you might otherwise avoid. On every staff, there’s at least one obsessive-compulsive, power-hungry personality, obsessed with rules and meetings. Such a person follows the boss into his office for briefings each day, to make sure he pressures staff into doing what she wants. Usually the boss has favorites.
Administration tends to side with the strong, in their battle to oppress those who aren’t power-hungry and who don’t like to quarrel, or to get involved in long, time-consuming disputes.
Such a personality will go after you until she finds something in your behavior to attack. She’ll then invade your personal space, like a dentist drill. The only anesthetic against such a person is to tune him or her out. Avoid such a person. But then the person goes after you. She spies on you and reports the little details of your day to the boss. She sifts through your coming and going until she finds something that goes against the ideal of right and wrong that cages her mind. Finally, you’re forced to make a show of strength, to assert the boundary; otherwise the bully will never stop. You assert your legal right and then the bully backs off, but not too far away. The minute you let your guard down, she’ll be back on the attack.
All this creates stress. There’s a knot in my stomach as I go to work in the morning and dread meeting certain colleagues. I’ve talked to other people and they say this is quite common in the workplace. Every staff contains people who delight in tormenting people. Too bad people can’t respect boundaries. Too bad people have trouble tolerating difference.
To cope, I make art about it. I have no choice but to work, or slide to skid row. In order to keep my cool and not sink into depression or fly into a rage, I need protection. Making art offers a kind of mind protection. I won’t elaborate on that right now. Another time.
I could also go on and on about the different freaks in the workplace, but you probably know all about it. You probably have your own tales of torment and misery, because certain hell-beings thrive on aggression, bitterness and self-pity.
Posted by Lohbado at 10:17 AM 2 comments:

the river felt she wanted salt 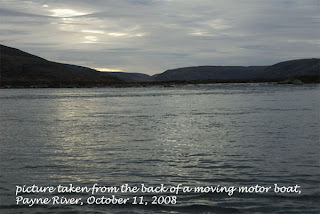 that's a quote from Finnegan's Wake, by James Joyce. a blog of this nature may or may not be suitable for somebody who sometimes has trouble sleeping, due to a lot of thinking. Finnegan's Wake is the perfect novel for moments of mental turmoil or insomnia.

That's a funny novel, a bit confusing at first, because it breaks down boundaries of grammar and evokes strange mental sensations. It's much easier to read after you give up preconceived notions, or approach it with an open and playful mind.

I chose this as a blog title because just about everything i tried was already taken. Finally, in desperation, i reached for FW and that sentence popped from the page. It fit perfectly, since last week i was actually floating on fresh water. Tommy Kudluk invited me to ride in his boat. Half way up river, salt water meets fresh water.
Posted by Lohbado at 8:35 PM 1 comment: