Lobadoh kindly allowed me to provide a few items from a long list of artistic suggestions offered during a typical Morono Art Workshop.

1. make a list of ordinary things.
2. make a list of sounds.
3. funky text: pelvic basin, two legs to stand on ground under foot
4. the bathrooms here are well kept.
5. Greyhound Voyage, Jean Coutu clock, string to tie suitcase, wallpaper paste, the way of the toilet, dripping tap, pool of urine, single-ply toilet paper, don’t dry your hands on greasy towel, don’t touch the door handle, microbes.
6. wasp attracted to lip mucous on a glass, one tub of ketchup, one tub of mayonnaise, murmur of conversation, sound of jet plane, dishes being collected from tables, child screaming, air vent.
7. two bottles olive oil.
8. ongoing description of yourself.
9. bearded one from no forest, black fly tumors. Dream the other way. Tell-tale look in the eye. Flicker of recognition.
10. He looked like he wasn’t having fun in life, until the turkey sandwich provided inspiration. It reminded him of the good old days, mama’s turkey dinner, with stuffing, mashed potatoes, cranberry sauce. Turkey stinks when it cooks. It smells steamy and warm, like flatulence.
11. He came out of moldy, musty cracks in the brick and concrete to deliver bad news, you broke a minor local bylaw. You forgot to measure the weight of caffeine in the coffee. The Department of Coffee needs to know in order to determine what level of permit is required, and the cost (racket) of the required permit.
Posted by Lohbado at 6:49 PM No comments: 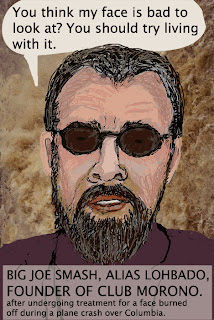 Here's the inspiring story of a man who nearly died during a plane crash over Peru. Thanks to the healing qualities of Morono Juice he experienced a miraculous recovery.

Big Joe: You're afraid to look at me? It took me a while to get used to the looks; the shock, how people would gasp, or turn pale when they first saw my burned off face. You think my face is bad, you should try living with it. Try waking up in the morning and seeing this face in the mirror. You never get used to it.

To not be depressed, I imagine my face is a painting, lots of texture, plenty of line and wrinkle decoration. Some people deliberately mutilate their skin with tatoos and piercing. I don't need any beauty treatment. Who knows, maybe face burning will be the next fad? Burn off your face as a primitivistic way of trying to feel something.

Let this funny face of mine be a warning. Stay away from drugs. I used to fly drugs out of Columbia. One day, the plane burst into fire over Peru and crashed in the jungle. We waited two weeks to be rescued. The only way we could survive was to eat those who didn't survive. For two years, my face looked like pepperoni pizza, all dressed.

Thanks to the healing properties of Morono Juce, my face is quite presentable.
Posted by Lohbado at 10:17 AM 1 comment:

Mechanical Operation of the Spirit 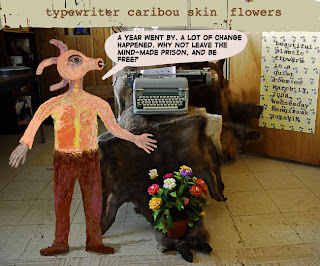 Today I took fifteen boxes of books to the airport, since I'll be moving back to Montreal at the end of June. Two students helped me move the boxes. In return for the favor, I bought them lunch at the Coop store. It's a sad feeling to dissolve the home, to pack things in boxes, to leave a place behind, to set off into the unknown.

Later, as I went out to enjoy the sunshine, a jealous colleague shouted my name and gave me a dirty look, as if to say: where do you think you're going? She rode by in a pickup truck. Some people get really upset if they suspect you're enjoying a moment of happiness. I ran home, had a fresh cup of coffee and read a hilariously funny text by Jonathan Swift, entitled: Concerning the Mechanical Operation of the Spirit, a satire on religious fanaticism.

The text treats of many useful matters, such as "three general Ways of ejaculating the Soul," "methods of managing the senses," in order to enter a state of rapture or inspiration, during which time a person receives revelations about the mysteries of existence and the cosmos. To go into trance, fanatics "violently turn their Eyeballs inward, half closing the Lids", sit rocking back and forth, "making long Hums". Basically, to experience mystic knowledge, one should suspend reason and allow imagination to lead one into "a thousand Deliriums."

I love spiritual recipe books. One of my favorites is Spiritual Exercises by Loyla. I read it years ago and don't have it with me now. He suggested that a sure fire way to see God is to go without eating or sleeping for several days.

What struck me in reading Swift was how his writing sounds so contemporary. Walk into a new age book store and browse through some of the books, the world of make-belief. You don't even need to go to a bookstore. Just listen to some of the fantastical things that people believe about the "after life", auras, astral travel, reincarnation, vision quests and so on. To be a wise man or woman, all you have to do is wear the right clothes, have a funny look in the eye, speak slowly and seriously, flash a toothy smile, act self-assured, as if there's nothing you don't know, because all has been revealed to you, including the answer to the riddle of the universe. What is most strange is how so many people are willing to set aside reason and play along with it, perhaps in the hopes that they too might one day acquire spiritual powers.

Posted by Lohbado at 2:24 PM No comments: 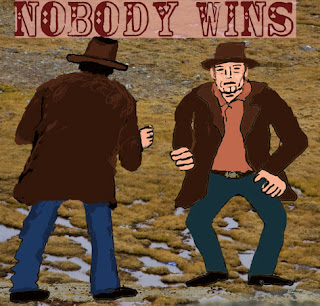 Posted by Lohbado at 8:22 AM No comments: It’s hard to avoid bumping up against closed-mindedness. I’m closed minded sometimes, but aspire to be open. If I catch myself closing down, I try to open up.
People do make judgments, saying something is good, bad, weird, boring, positive, negative, and so on. Often the judgments are hastily made, without reflection and without the person being properly informed about the matter. Gustave Flaubert wrote an imbecile’s dictionary, The Dictionary of Received Ideas, a collection of common opinions, predictable, ignorant and downright stupid pronouncements on various topics.
This could be quite amusing, except that one has to deal with such ill-informed people just about every day in a variety of situations. If you question the person, he or she might get emotional, intimidating you into keeping quiet. He might even bully you into playing along with his or her ignorance.
I learned over the years what happens when you try to have a discussion with someone who is not open to discussion. I’ve been punched in the face, spat on and lectured into silence and submission. One time a man literally followed me home from the café, attacking me with an endless monologue. He really wanted to set me straight. I literally had to walk into my house and slam the door in his face. He wouldn’t allow me to interrupt his monologue long enough to say goodbye. It’s amazing to meet people who are so self-assured and who feel they know what is right me and for the universe, a kind of megalomania. Name a topic and he or she has the answer.
Anyway, the question I’m raising: why is it so difficult to be open-minded? Why is it so difficult to examine one’s assumptions and beliefs? Are there certain concepts you hold sacred that you would never be able to question?
The other day I listened to the Beatles Magical Mystery Tour. The album was quite interesting and unconventional when it appeared. A response one gets when mentioning the album: yeah, the Beatles were on LSD when they did those songs. So that’s all there is to it. End of discussion.
Strawberry Fields, I Am the Walrus, Blue Jay Way and similar songs don’t fit the pop song mold. They stretch the genre of popular music, maybe even making some listeners uncomfortable or perplexed. However, the Beatles were sufficiently popular, so people accepted their experimental songs and they too became popular.
It never entered the discussion that one does not have to be on LSD to write something that pushes the boundaries. One merely needs to be open-minded enough to allow the imagination to play, to give oneself permission to explore. Exploration is generally discouraged or curtailed with snide remarks, like: that’s weird, twisted, warped. One might even accuse the artist of deliberately trying to piss off the listener. Some people thought Picasso was deliberately leading people by the nose and laughing as he broke the conventions of painting. They say: that’s not art. I don’t understand it, etc.
Basically such refusal to understand, and such dogmatic statements are based on uptightness and closed-mindedness, in other words, a refusal to be open to what is there, an unwillingness to even give it a chance.
John Lennon appreciated culture. He mentioned the influence of James Joyce, who pushed language, pun and word play to the limit, in a way that John Lennon enjoyed and tried to emulate in some of his song writing. Creativity does not depend on drugs; it depends on having an open mind and giving oneself permission to explore what lies beyond the limit of habit or belief.
It’s amazing what you can do when you give yourself permission to explore, when you’re awake and brave enough to set aside what you’ve been taught, or what you habitually accepted as being the last word on reality.
Posted by Lohbado at 10:20 AM 1 comment: