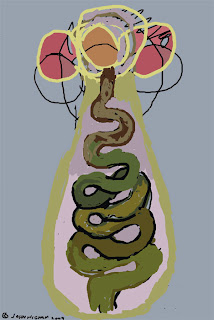 Strange to be in a body, the mirror in a house reflected this funny looking body as I walked upstairs to bed. The image in the mirror was so freaky, it sparked another bout of insomnia. Of course, it doesn't matter. I don't have to get up for work. I no longer have a job, which is fine for now, until the money runs out, then it will be a problem.

It's upsetting to have to be in a body, or to have to be anything for that matter. It would be more rational for there to be nothing. As for "earning a living", is life really worth earning? However, once born, you have no choice but to live. Ok, so let's make a virtue of necessity and have a look at this so-called reality, this sack of guts walking around, driven by desire and survival needs. I don't know what to make of it. And this voice in my head, I have no idea what that's all about, all these thoughts, so much sound and fury for nothing.
Posted by Lohbado at 12:48 AM No comments: 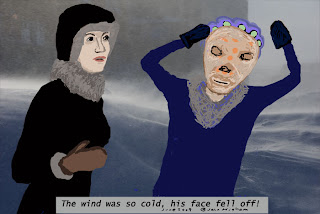 "For God's sake," said a man picking up coins, "Everybody's gotta be good at something."

Fluids rip through plastic wrap, aerate the brain. Change takes a while to sink in. It raises a lot of emotions. I don’t even know where the emotions come from; one moment happy, the next sad, one moment in despair, the next euphoria.

Posted by Lohbado at 3:29 PM No comments:

Travel from North to South

Heat, holiday, bright light, back in the city, walk to a bookstore, buy an art book for under twenty dollars. Come home. Sit on the balcony. Fall asleep. The woman upstairs rings the bell and asks if I would carry her recyclables bucket down to the curb. I go back to sleep, wake up, make a coffee, sit on the balcony, feel groggy and dazed, alone, city retreat, relax, no problem, don’t worry.
Slowly unpack the suitcase. Hang shirts in the closet. Place electronic devices on a spare bed, cords, cameras, flash, extra lens, chargers, external hard drive. Keep those things organized.

It takes a few days to recover. It's hard on the mind and body, going from the cool north to the hot south, from space and simplicity to congestion and noise. It's absolutely fascinating, all part of the experiment to see what happens when you live. Even the loneliness is vivid and picturesque. Wander the streets of Montreal in a daze, like a space alien. It's worth a try.
Posted by Lohbado at 12:45 PM 2 comments:

Libation to the earth, via the body, digested beverage. Pour through the mouth, down the throat and out through the bladder. Chemicals to soften and enliven the brain, to dissolve dark clouds, to enhance connection with sight and sound, I don’t know where else to turn, except to open windows to clear away fog and rank odor. Make offerings to the uptight, closed down, rigid mind, fluids to render the mind flexible and ready to leave the mind-created prison behind in order to enter the vast world.
Sin. Take a photo of the vodka bottle and put the word sin on the label. Add religion as a mix, sin and religion, add a little piss and blood, you have a perfect cocktail to blow the mind, should you wish to put your burden down and be free of the fearful illusions passed down from one generation to the next.
Just don’t ever be arrogant. Arrogance is the enemy. Arrogance, a false sense of self-importance, a feeling of power, big-time Charlie, strutting around until somebody knocks him down. Arrogant people get knocked down. Arrogant teacher receives punches in the face. He can press charges against a little girl who hit him. He might win with his arrogance, but he reveals his true character in the process. Ultimately, nobody is fooled, except the person trying to fool others. He’s fooled into thinking he could fool others.
Sacred smell, sound, smell, art, smell of cheap perfumed deodorant, sound of the camera shutter, art of the visual field and the challenge of monkey ego, dancing around like dust motes in sunbeams, desperate for attention. Well then, for goodness sake, give it attention and then maybe it will be satisfied and go away. But if you deny attention, it will become increasingly belligerent and insistent. It will use every trick in the book to get your attention.
Nobody is special. Get over it. It’s so infantile to sink into despair when you realize that reality is not like mama’s big tit, ready for you to suck on whenever you feel the itch. It’s so pathetic when guys realize that the tit is not readily available and so they become bitter, filled with despair and rage, all because they failed to realize that mama has a life of her own and can’t always make the nipple available.
I’m grateful to madmen for helping me understand this. Maybe there’s a little bit of infant in every man. In the romantic tradition, the picturesque romantic poet and playwrite calls to mama as he dies. I’m not inventing this. It’s a true story. In the book of the dead, a more enlightened spin: mother and child luminosity unite at the moment of death, to the person who cultivated mindfulness or awareness. For the person who spent a lifetime running after illusions, lost in discursiveness, reacting to various urges and itches, without reflection, without learning from mistakes, and there’s nothing more sad and pathetic than a man or woman who is unable to learn from mistakes, such a person, at the moment of death, blacks out. There’s nothing to recognize when dying, after spending a lifetime of ignoring. How could you recognize that which you ignored?
Drink sacred fluids from grandmother’s body, before it’s too late. Did it ever occur to you that you’re alive right now and that you don’t have to believe everything you were taught?
Such truths become evident when the rug is pulled out from under me, when things fall apart. I lost my job, my home, am forced to pack everything into boxes, load the suitcase, catch a plane and fly off into the great unknown. Something may happen, you never know what.

Posted by Lohbado at 4:47 PM No comments:

Pietro Poopini is quite a funny man. I don't take him too seriously, dressed up in his blue gown, hands raised as if ready to lead some sort of religious ritual. All he did was eat some figs. Figs and anxiety made digestion vivid, churning stomach, intestinal cramps, just keep your cool. Don't explode. It's easy to have an explosion when stress builds up. Little things could make a person fly into a rage.

I spent the past week packing and sending boxes to the airport. I'm returning to the south. Having to move I would rank as one of the top five most unpleasant tasks, next to looking for work, trying to find an apartment, getting a divorce. It's nerve wracking. The challenge is to keep your cool. That's a good test. Learn to withstand small irritations and then gradually increase the ability to not react to greater irritations. In time, one could learn to stay even keel, no matter what happens.
Posted by Lohbado at 9:10 AM No comments:

I spent the weekend packing boxes, dissolving the home, fitting worldly goods into boxes. Tuesday I'll take them to the airport and ship them to Montreal. My worldly goods take up about thirty boxes, mostly books.

It’s a challenge, to pack up and move without losing your cool. See if you can do it. Of course, it feels impossible. I lost my cool yesterday, but didn’t explode. I merely cried out in agony, which is an improvement. I remember, during past moves, flying into a rage and hurling half-loaded boxes across the room. I won’t do that anymore. It makes more work, because after there’s a mess to clean up. Stay cool and the task will go smooth.
Posted by Lohbado at 12:01 AM No comments: