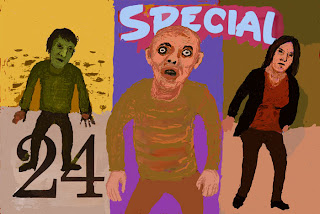 Unplug the phone. There’s nothing worse than the expectation that at any minute the phone could ring and someone will talk about work.
It gets oppressive after a while. I’m high strung and require a lot of space and silence. That’s one reason I love the north so much. One could go home on a Friday after work and talk to nobody until Monday morning. It’s amazing to spend a weekend alone, without distraction, to relax and pay attention to sight and sound, or to look at the behavior of mind, the games, scenarios, emotional drama, bitterness, resentment, loneliness and boredom. It’s better than going to the movies. Instead of watching TV, I watch my mind. I’m also a sociable man and go over to Steve’s every Saturday night to watch hockey night in Canada and enjoy talking to friends. But lately, things have been getting on my nerves. It’s time to relax.
First, unplug the phone. The sound of a ringing phone can grate on the nerves like the clanging of an alarm clock in the morning. I wake up usually, just before the alarm rings and turn it off, in order to not hear that brain-destroying sound. Having the phone plugged in, being at the mercy of whoever decides to bring bad news puts my nerves on edge. Usually I don’t get too many calls, but I do have a history, post-traumatic stress. I received many abusive phone calls in the past. I don’t even want to think about it. Phone calls announced the death of my parents and then the suicide of a close friend. The phone has taken on negative connotations. Bad news can wait.
Put on some nice music and for a few hours, it almost feels like being on vacation. Enjoy the protection of being in a village in the Arctic, far away from the city. Of course, I can’t force my mind not to think about work. That would only make thoughts of work stronger.
One of the things that make work unpleasant is to constantly receive unpleasant messages or criticism. First thing every morning, as I walk into work, I’m greeted by the complaining, discouraging speech melody of colleagues as they chatter like water dripping endlessly about how other workers aren’t doing their job, or something wasn’t done properly or how people aren’t the way one would like them to be. It’s helpful to limit exposure to discouraging talk, the continual gloom and doom of how reality doesn’t fulfill one’s egocentric expectations.
I avoid the staff room in the morning. I see gestures from a distance and can tell right away what sort of thing they’re talking about. You can see the facial expression of someone who thinks she or he knows better and can’t understand why people don’t agree. After the initial discouraging and negative chatter in the staff room, workers trail off in couples, or little alliances, to their rooms, where they can continue to back stab and come up with strategies to attack those who disagree.
In the best of all possible worlds, one would not have to work. One would return to Eden, or the garden of earthy delights. At work, one is forced to deal with people one would otherwise never encounter. Work brings together people from a variety of worlds. If everyone could respect diversity, it would be paradise. Trouble starts when one person feels he or she knows better and then acts on this sense of superiority. Such a person, hungry for power, tries to manipulate the situation to increase his or her power. This immediately creates resentment and conflict. The fight begins. One keeps a diary to note everything that happens, in case one is forced to hire a lawyer to resolve a conflict that gets out of hand. The only way to deal with power hungry colleagues who bully their way through the system is to avoid them and when necessary, to assert boundaries and provide warnings, that if the person steps over the line, there will be legal consequences. Then the person generally backs down and leaves you alone and contents him or herself with fuming and saying bad things about you behind your back.
After a confrontation, if one successfully forces an aggressive colleague to back off, things return to the normal, hellish everyday balance of being polite on the surface but fuming and full of misery underneath. My policy is to avoid conflict. Don’t lock horns with hell beings. Make a show of going along with them, of deferring to their insatiable appetite for power and then go to your room or office and lock the door. Anyone who feels they will find happiness through conflict, manipulation and power games is doomed to unhappiness.
After work, go home, unplug the phone and relax. Of course, whatever you try to exclude is automatically included, by the fact that the situation you choose happens against the backdrop of what you did not choose. The act of trying to not think about work brings work to mind. You can’t win. Might as well let go of the whole thing and not worry about it, or enjoy it as entertainment.
Posted by Lohbado at 8:57 PM No comments: